Hydrogen has become an important part of strategic plans for the energy sector through policy initiatives such as the European Green Deal, which aims to install enough electrolyzers on the continent to produce 10 million tons of renewable hydrogen by 2030. Here in France, the government has earmarked €7.2 billion to fund hydrogen projects by 2030, with up to €2 billion of that to be spent by 2022.

Transportation is one of the sectors undergoing a seismic shift, as it embraces renewable energy in an effort to reduce reliance on fossil fuels. There’s a move away from polluting internal combustion engines (ICE) and towards alternative means of propulsion. One of the technologies in the mix is the hydrogen fuel cell, which can power everything from cars to ships, from trucks to trains, from drones to planes. It plays a complementary role to battery electric vehicles (BEV) in helping to decarbonize the mobility sector.

Why is hydrogen an attractive alternative to fossil fuels?  For starters, hydrogen is the most abundant element in the universe, so there's little fear of depleting it. On planet Earth, hydrogen is mostly found in water, but also in other compounds, such as methane. It needs to be  separated in order to extract pure hydrogen (H2) that can then be used in hydrogen fuel cells to power vehicles (FCEV). When hydrogen reacts to produce energy, the chemical bi-product is H20 – plain water – and not carbon dioxide. So, it’s a relatively clean form of energy to use.

However, there are considerable challenges to extracting hydrogen. The most common method of extraction – steam reforming of natural gas – is itself a polluting activity, creating CO2 as a by-product. This “grey” hydrogen does not help in meeting climate goals. There are methods of capturing the CO2 and, better yet, of extracting hydrogen using methods powered by “green” energy sources, releasing no carbon dioxide at all. If the electricity used for this process is produced by renewable sources, such as solar, wind or hydro-power, the resulting hydrogen is considered renewable, as well. 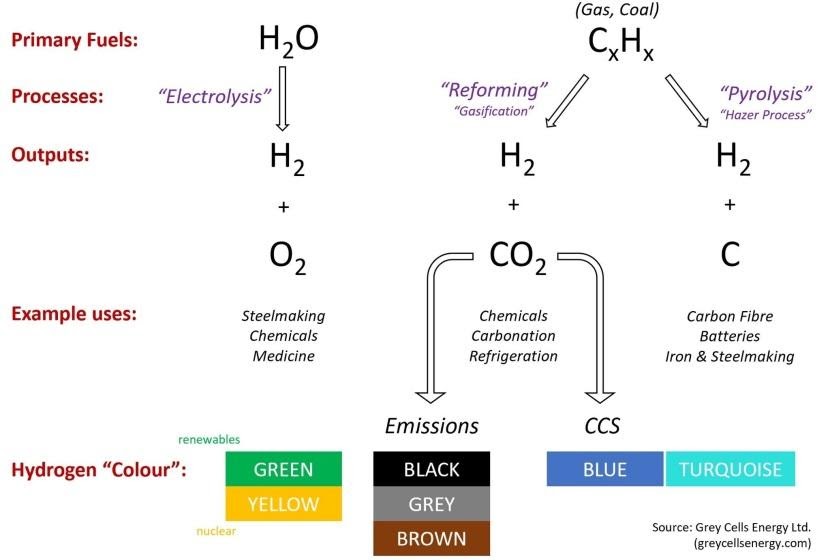 So, what is a hydrogen fuel cell and how does it work?  A hydrogen fuel cell is a device that creates electricity through an electrochemical reaction (of hydrogen and oxygen), rather than through combustion (burning of fuel in a standard petrol or diesel engine). The most common type of fuel cell for vehicles uses a polymer electrolyte membrane (PEM) with gas diffused in thin layers to ensure that both hydrogen and oxygen are distributed evenly.  Individual cells are stacked to achieve higher voltage and power.

Here’s how the U.S. Department of Energy Efficiency & Renewable Energy (EERE) describes its workings : “Fuel cells work like batteries, but they do not run down or need recharging. They produce electricity and heat as long as fuel is supplied.  A fuel cell consists of two electrodes — a negative electrode (or anode) and a positive electrode (or cathode) — sandwiched around an electrolyte. A fuel, such as hydrogen, is fed to the anode, and air is fed to the cathode. In a hydrogen fuel cell, a catalyst at the anode separates hydrogen molecules into protons and electrons, which take different paths to the cathode. The electrons go through an external circuit, creating a flow of electricity. The protons migrate through the electrolyte to the cathode, where they unite with oxygen and the electrons to produce water and heat.”

How to improve fuel cell efficiency?  The temperature, as well as humidity, hydrogen concentration, purity and pressure inside a fuel cell, can all affect its performance. To improve efficiency and ensure a consistent energy output, a cooling process typically passing fluid or air between the fuel cells rids them of excess heat, which in turn helps control the cell’s humidity for optimal performance. In order to keep the temperature constant, a robust sealing system is necessary.

Liquid silicone rubber (LSR) is used for high-precision sealing of hydrogen fuel cells, because it can be overmolded directly onto the thin metal, plastic or composite plate structure. It has excellent adhesion, flexibility, impermeability and compression set properties. And it has strong temperature resistance, so LSR doesn’t stretch in high temperatures and doesn’t go rigid when it’s cold. LSR is chemically inert and has good chemical and UV resistance, which makes is suitable for use in vehicles. Overmolded seals are fitted directly to the gas diffusion membrane and can be used in compact cell stacks, ensuring a reliable power source, saving on weight and space, resulting in superior leak resistance and providing an efficiency twice that of that an internal combustion engine. 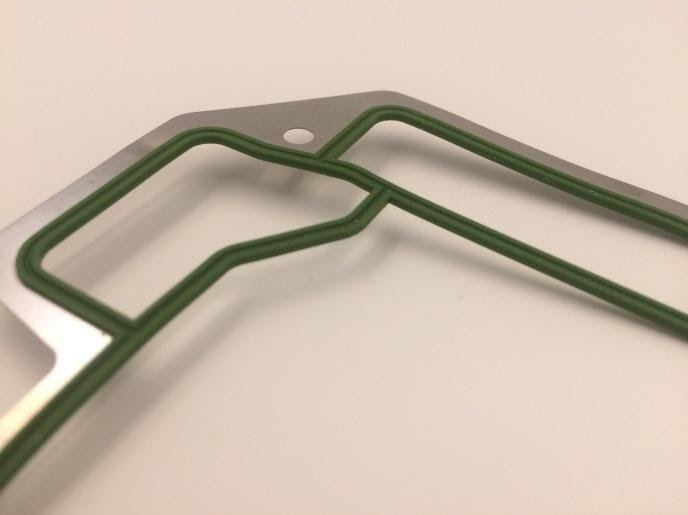 Here at Acaplast, we are following developments in the hydrogen mobility sector and are happy to discuss projects you might have in mind.  To get more information about the Acaplast LSR Hydrogen Fuel Cell Seal or discuss your development idea, please contact us.

For more information on the parts of the fuel cell and their function, you can refer to the EERE website here : https://www.energy.gov/eere/fuelcells/fuel-cell-animation-text-version