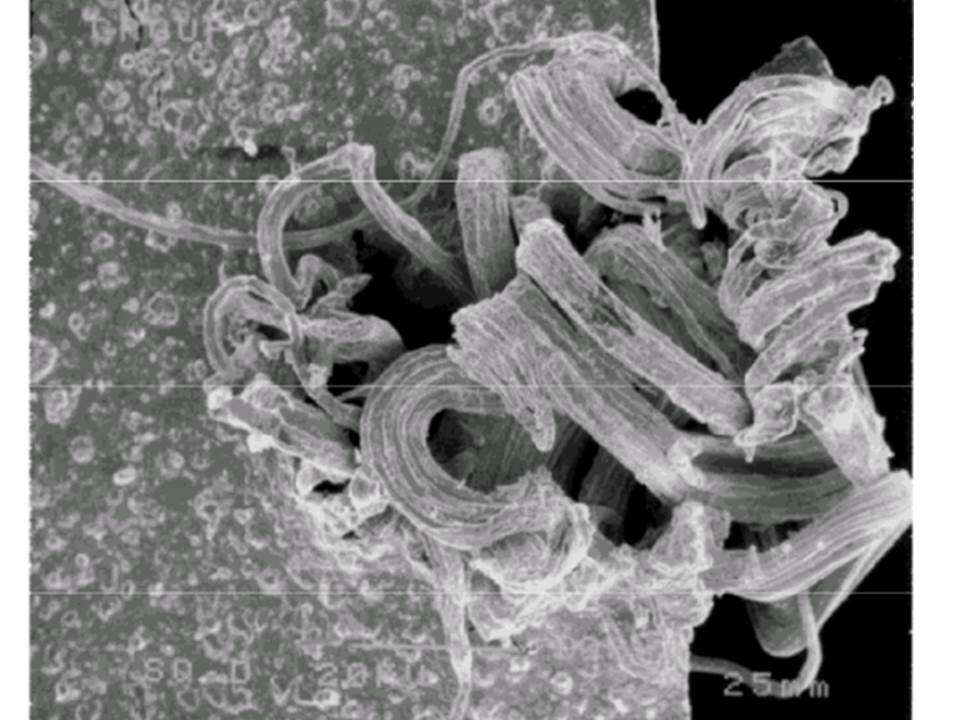 A Nasty Combination for Manufactured Parts

I was sitting next to my colleague Charles-Henri the other day and noticed he was comparing chemical properties on a chart and scribbling notes on a pad.  Charles-Henri is our Chief Chemist and is often working on new formulas, so I asked him what‘s the latest.  “A low-fogging, sulfur-free rubber formula,” he said.  As I’ve not had any chemistry courses since my senior year in high school, I decided it was time to study up.

The first thing to determine was why one would need a low-fogging, sulfur-free compound in the first place?  It seemed pretty clear what fogging is, as I’ve often experienced it in my own car:  Condensation on the inside of the windshield.  Ah, but fogging can also describe the clouding or discoloration of plastic or glass as a result of deterioration caused by outgassing.  It’s the effect that causes the inside of your headlights to become yellow or the interior windshield to turn hazy.  (As an aside, the exterior of these parts is damaged by UV rays from sunlight.)

So, what’s outgassing?  Outgassing (also called off-gassing) is the release of gasses that have been absorbed or dissolved in any number of materials, including plastic and rubber.  Some of these gases, called VOCs (volatile organic compounds) and a subgroup called SVOCs (semi-volatile organic compounds) are both natural and man-made and can be harmful to people and the environment.  Examples are ammonia, benzyl phthalate, butanal, ethanol, formaldehyde, hydrogen sulfide, methylene chloride, nitrogen dioxide and sulfur dioxide.

You might think that VOCs only come from car exhaust and industrial emissions, but they are actually found in a number of household and office products, such as building materials, cleaning products and disinfectants, dry-cleaned clothes, equipment like copiers and printers, food preservatives, glue, new cabinets, carpets and furniture, paints and paint strippers, permanent markers, pesticides, polyurethane foams and wood varnish, to name a few.

There is a growing trend to enhance air quality by limiting the release of VOCs into the environment through government mandates, such as the European Union’s REACH regulation, and through voluntary restrictions adopted by companies.  The Covid pandemic has heightened the need for improved indoor air quality and one of the simplest ways of addressing the issue is by ventilating your home and office on a regular basis.

For more about REACH:  https://echa.europa.eu/regulations/reach/understanding-reach

For more about indoor air quality from the U.S. General Services Administration:  https://sftool.gov/learn/about/626/enhancing-health-indoor-air#lever1

So, back to Charles-Henri’s formula.  My colleague’s first task was to create an elastomer (rubber) that would limit the amount of VOCs emitted from the rubber to stop the fogging effect on the interior of a car headlight.  Apparently, various ingredients in elastomeric compounds can be the culprits in VOC outgassing.  These include plasticizers (to promote flexibility), processing aids (to reduce viscosity) or carbon black (to strengthen rubber).

These gasses, which cannot escape from the enclosed headlight housing, cause glass and plastic discoloration, damaging the cover’s physical appearance.  More importantly, cloudiness can reduce and scatter light.  Decreased visibility can be downright dangerous.  It’s like driving in fog.  Research by the AAA (American Automobile Association) found that cloudy headlights generate only 20% of the amount of light that new headlights do, seriously diminishing the headlight’s ability to provide adequate illumination of dark or obscured roadways.

AAA Illuminates the Dangers of Driving with Cloudy Headlights:  https://newsroom.aaa.com/2018/12/dangers-driving-cloudy-headlights/

Anything that can reduce the fogging effect of outgassing is a good thing.  So, where can one start?

There are various rubber caps, seals, hoses and gaskets in an automobile, including components within the structure of a headlight.  Heat generated by a headlight unit increases the temperature in the closed structure, augmenting the outgassing effect.  Therefore, creating a low-fogging (also called anti-fogging) formula for the rubber parts within this structure is not only desirable, but it's actually become a new norm for some manufacturers.

And it’s not just automakers that are concerned.  Any other type of product or appliance that has rubber contact – whether that’s a perfume bottle, a beauty serum dropper, a laser pointer, a syringe, a food container, protective goggles, the lens of a telescope or wine in a bag in a box – can suffer the negative effects of off-gassing, which can be detrimental to the properties and proper use of the product.

I think we’ve covered the issue of fogging, so let’s return to the second part of Charles-Henri’s challenge -- to make his formula sulfur-free, as well.

Sulfur is a naturally occurring element that can be found in soil, food, plants and crude oils.  Think of a spewing volcano - sulfur dioxide (SO2) is one of the most common gases released when it erupts.  Not all sulfur is aggressive, but there are several types that are highly corrosive, flammable and toxic.  Acid rain, which is precipitation that damages forests, lakes and manmade structures is formed when sulfur dioxide (SO2) and nitrogen oxides NOx (NO and NO2) combine with atmospheric water.

Sulfur is important in the creation of rubber, because the curing or vulcanization process of heating and hardening elastomers uses sulfur-containing compounds to convert natural rubber or polymers into materials with various mechanical properties.  (It is not the only method of rubber vulcanization, but it is the most common.)  Sulfur forms a sort of bridge crosslinking the polymer chains to create a stable and strong rubber.  Vulcanized rubber products include tires, seals, hoses, bouncing balls, erasers, shoe soles, toys and much more.  So, sulfur is quite useful in this context.

However, sulfur in proximity to metals, such as silver, copper and zinc can cause a lot of damage through corrosion.  Sulfur gas can harm jewelery, copper plumbing, telephones, toys, microwave ovens, robots, gas turbines, data centres, electrical towers, vehicle electronics – anything that contains electrical chips or wiring.

The issue with sulfur is especially pertinent to the industries in which we work.  Nearly all electrical connections in modern automobiles have silver-coated contacts, whether it’s in switches to open or defog windows, to heat seats or play music.  That’s because silver is the most conductive metal for both thermal and electrical conductivity, making it particularly useful for solder, electrical contacts, switches and electronic circuit boards.

Charles-Henri explains:  “There is a lot of silver in new headlights with LED bulbs.  The lighting systems get hotter because of more electronics, such as auto dimming and directional adjustment.  There’s an electric fan in some models that pushes hot air into the light unit to dehumidify and defrost it.  The problem is, when temperatures go up and there is sulfur present in the rubber, it outgasses, causing corrosion.  And then the light goes kaput!”

Most commonly we see silver sulfide as black tarnish on silverware.  More harmful is a corrosive film than can form on electrical contacts, creating an insulating layer, which can result in electrical failure of any number of large or small devices or systems.  Silver whiskers appear when silver sulfide forms on the surface of silver electrical contacts operating in an atmosphere with a large amount of hydrogen sulfide and high humidity.  The whiskers can “grow” rapidly, break loose and bridge isolated conductors, potentially resulting in a short circuit and device failure.

The interaction of various common gasses can wreak havoc on electrical and electronic systems.  Charles-Henri notes, “The challenge was to develop an elastomer that is sulfur-free and has low outgassing properties that can respond to the need for caps for the latest designs and newest generation of automotive headlights.”  It’s a challenge that was met with success, as headlight caps using Acaplast’s low-fogging, sulfur-free rubber compound are now being produced for a European OEM.

Although Charles-Henri’s challenge du jour was low-fogging and sulfur-free rubber for the auto industry, the same issues are problematic for components in many different products in numerous industries – from cosmetics to pharmaceuticals, from food contact to metering.  Whether it’s a small, sealed electrical component in a home appliance or a circuit breaker in a power station, using material that reduces outgassing of harmful substances can prolong the life of products and improve safety.  Don’t hesitate to call on Acaplast for all your rubber formulation needs and let us provide you with a solution “à la carte”.