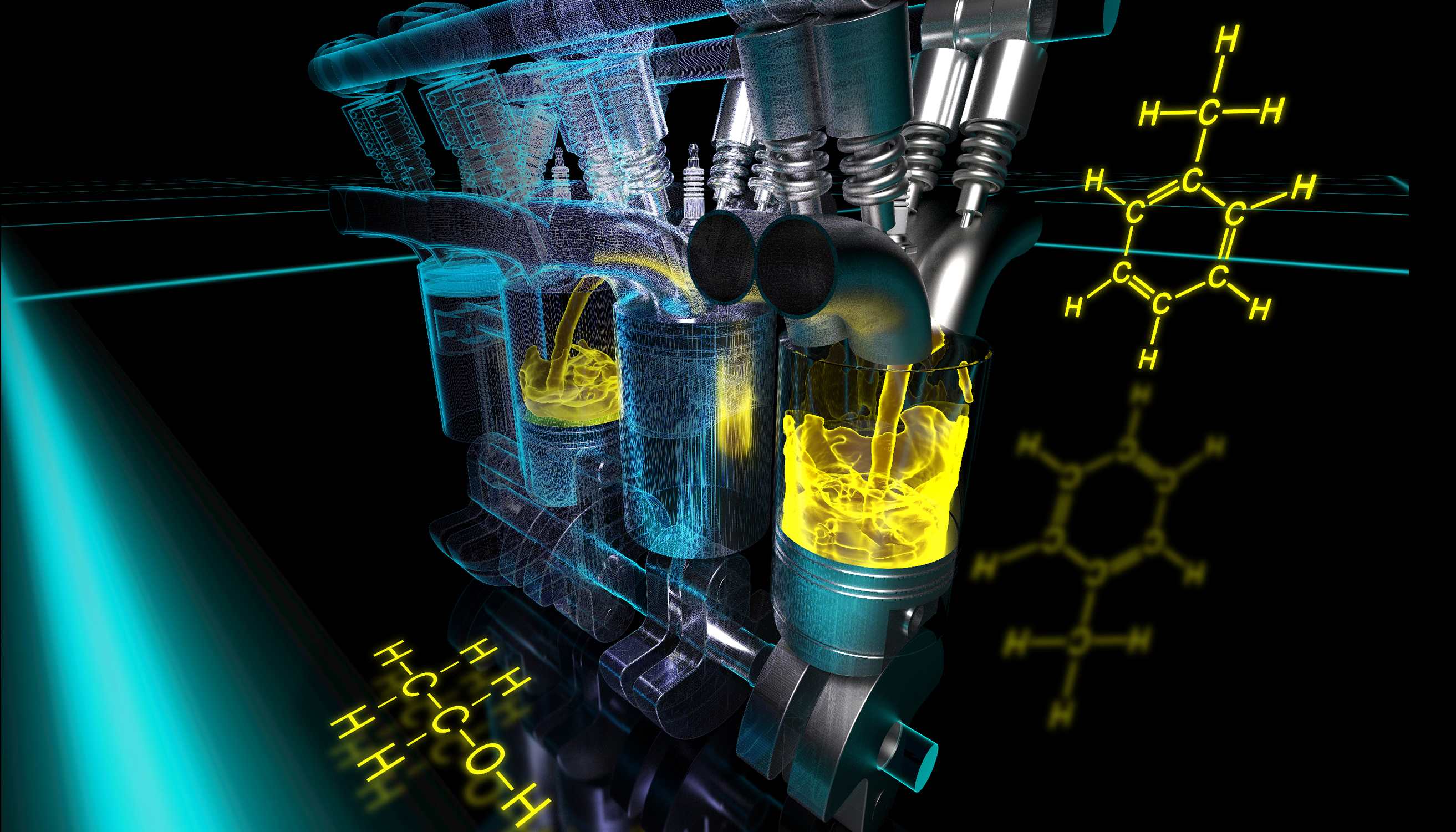 A coalition of actors in the road transport sector has written an open letter to Emmanuel Macron, President of France (which currently holds the Presidency of the European Union), suggesting that internal combustion engines (ICE) have a significant role to play in achieving climate neutrality by 2050. The European Commission (the EU’s executive branch that draws up European legislation) has indicated its intention of effectively banning ICEs by prohibiting the sale of new cars that run on petrol or diesel from 2035.

Harmful emissions, also called greenhouse gasses, are the main reason ICEs have fallen out of favor.  These emissions are tied to far-ranging environmental and health effects, and they’re released as pollutants when hydrocarbon fuels, such as petrol and diesel, are burned in vehicles with combustion engines.

So, proposing the continued use of ICEs sounds counterintuitive, but the authors of the letter explain why they think it makes sense. We’ll summarize the key topics addressed in the letter, dated 17th March 2022, and get the reaction of Jeremie Choukroun, the CEO of Acaplast.

The letter’s signatories include associations that represent energy players in renewable gas and sustainable fuels, OEMs and component suppliers, fleet operators and agricultural producers.  The letter clearly demonstrates a commitment to decarbonization, but expresses concern that the European Commission places too high a priority on electric vehicles (EV) to reach its goals, to the detriment of other technologies.

The need to act is no longer a choice, but an imperative in Europe.  The transport sector represents 27% of the EU’s total CO2 emissions and road transport counts for 19% of that.  There is a 2030 climate target of at least 55% reduction of net emissions of greenhouse gases as compared to 1990 and a legal objective for the European Union to reach climate neutrality by 2050.

The European Car Manufacturers’ Association (ACEA) has stated that banning a specific technology is not rational and that internal combustion engines, hybrids, battery electric and hydrogen vehicles all have a role to play in the energy transition. While the EU embraces a strategy of using electric vehicles and also supports hydrogen as an alternative to ICEs, it seems to ignore the benefits of renewable and low-carbon fuels. 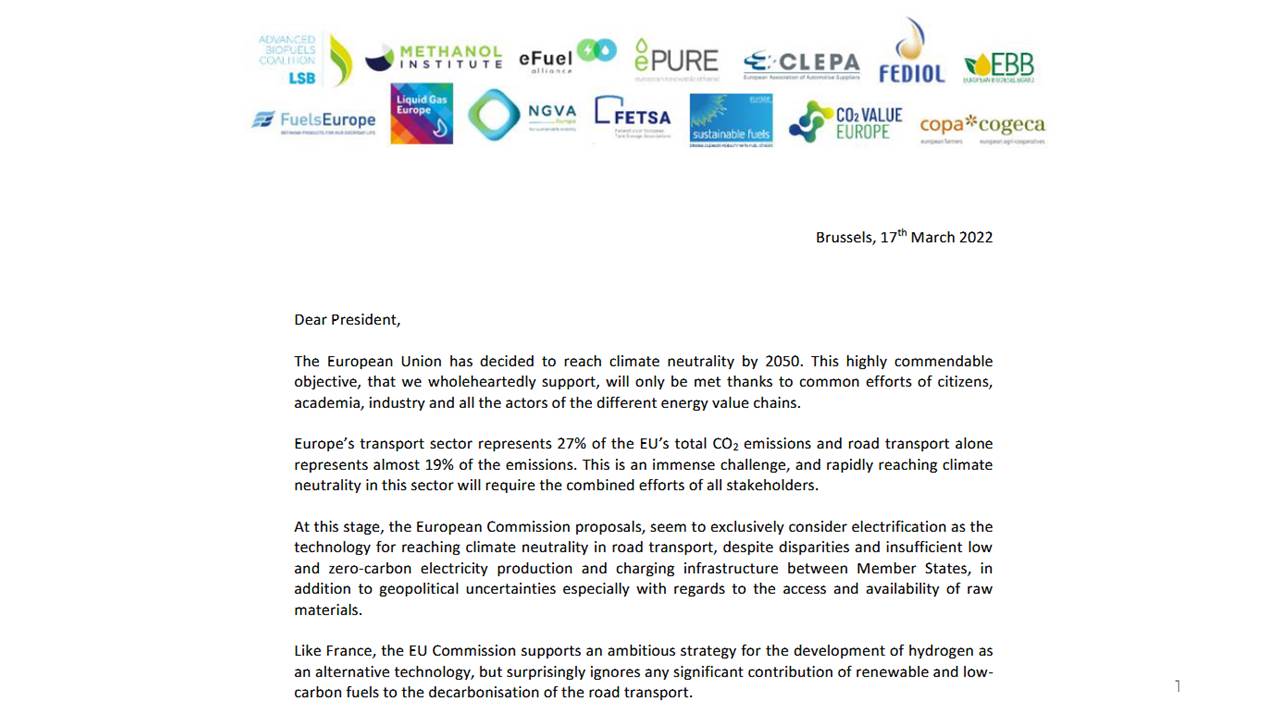 Here’s a summary of issues raised in the letter to President Macron:

The automotive market is in a state of evolution and there needs to be a range of solutions for different mobility scenarios.  Electric vehicles make sense for inner cities, which are looking to reduce pollution, and for short trips, where there is no need for frequent (and time-consuming) recharging.  Cleaned-up fossil fuels and renewable biofuels are appropriate for longer distances, where refueling time is a consideration.  You can add hydrogen-powered vehicles to the mix for heavy haulage, public transport, naval and aviation transport.

Keep in mind the significant difference in the amount of power generated through a combustion engine and that which comes through an electric battery. The energy per kilo from each technology varies greatly and being forced to choose electric over ICE will pose problems for trucking companies that are hauling freight long distances.

In addition, infrastructure for EV charging and hydrogen refueling is simply not yet in place across Europe to be able to match demand to the goals in terms of energy supply.  And you have to look at whether the electricity and hydrogen is actually green, meaning that it comes from renewable sources.  If not, then how sustainable, i.e., climate neutral, is it really?

One also needs to consider that driving habits take time to change.  For decades, drivers have had great freedoms associated with cars that they can drive long distances for work or pleasure and which only take a few minutes to refuel.  Although fast chargers are becoming more available and reduce charge times for electric batteries, it still takes 40 minutes to fully recharge an EV car, even with a supercharger.

We’ve been focusing on the mobility market in advanced economies, but what about less fortunate countries that have no electric charging or hydrogen refueling infrastructure whatsoever?  Combine that with low purchasing power, where the cost of buying vehicles with these new technologies is out of reach of the average person, and you find a lopsided global approach to addressing climate challenges.

In 2008, “wise minds” tried to solve the issue of CO2 emissions with corn-based ethanol that had unintended environmental consequences, such as water scarcity and a shortage of fertile ground to feed the planet.  Let’s be careful not to create a new problem now, while attempting to solve another.

While electrical vehicles have largely been embraced as the solution to harmful emissions, less attention has been paid to the downside of using EVs.  One of the key concerns is the need for rare earth elements used in EV batteries.  Mining these rare earths is itself a polluting activity, producing large amounts of toxic waste, such as radioactive residue.  Electric vehicles contain elements (in lithium-ion batteries, microchips and other electrical components) which are toxic and are also a fire hazard, when disposed of together.

Due to the complexity of EV batteries, they are very difficult to disassemble and recycle.  So there is the very real danger of replacing one form of pollution (carbon emissions) with another (harming air, soil and groundwater reservoirs).

One should look at the lifecycle of vehicles to see what makes the most sense in terms of technologies governments should support.  Vehicles produced in developed economies often change hands three times during the course of their lifespans.  A new car might be bought in the UK, resold to a second owner in France and eventually sold on to a third owner in Morocco.  This is good practice in terms of extending the lifespan of the vehicle.

However, because of the previously mentioned barriers to alternative-powered vehicles making headway in the developing world, it’s most likely that it will be ICE vehicles that find their final homes there.  So it makes even more sense to encourage the use of biofuels to reduce global emissions.

Better yet, governments and industry should look at the larger transportation sector and beyond to attempt to solve the hydrocarbon emissions issue.  In France there is a real lack of multi-modal transport for freight, with most of it being delivered by truck.  There have been efforts to revive European rail and water networks to be able to move freight more efficiently and with less impact on the environment.  Perhaps this could be expanded to create global solutions?

While Europe is investing heavily in greener options for generating energy, shouldn’t more be done to help developing economies find greener solutions, too?  Biofuels (matter derived from plants and animals) can be made from algae, so why not encourage the local cultivation of algae in man-made ponds on land that is not suitable for traditional farming?  There is minimal impact on freshwater resources, as algae can be grown in saline or even wastewater, resulting in a renewable, alternative energy source.  Opportunities for innovative solutions are abundant.

Acaplast is a company that’s always adapted to the times -- we’ve gone from artisanry to industry over the course of six decades.  And we’ve been driven by the need to adapt our business to the expectations of our clients, so that we can all achieve our future goals.  However, we need to be careful that success is not at the expense of other companies and their employees – or the planet.  Sometimes it’s a difficult balance to find.

Click here for link to complete letter to President Macron.